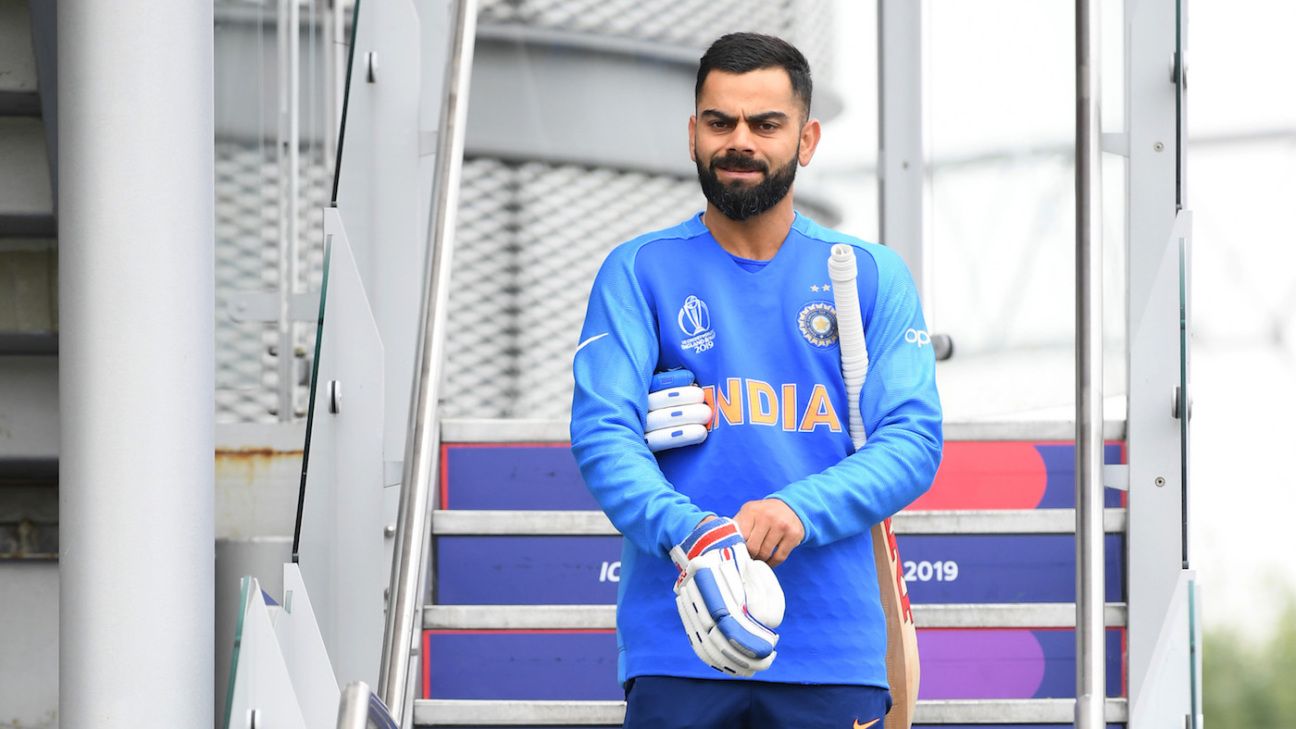 Virat Kohli is “very excited” by the idea of the soon-to-start World Test Championship (WTC), which, for India, will begin with a tour of the West Indies next month. India have picked younger players for the tour that will start with three T20Is, followed by as many ODIs, and end with two Tests that will be a part of the Test championship cycle that starts with the Ashes next month.

“It [the WTC] is very exciting. I think it’s happening at the right time for Test cricket,” Kohli told the Times of India. “Although you are going to play a bilateral series, the meaning and importance are way more. You have to plan for every series. I was excited about something of this sort and now it’s coming to life.”

The WTC will be contested among the top nine Test-playing nations over a two-year cycle, at the end of which the top two teams will play the final in June 2021. For the limited-overs series, India have picked middle-order batsmen Manish Pandey and Shreyas Iyer again, whereas Navdeep Saini and Rahul Chahar are in line to make their international debuts.

“They are amazing,” Kohli said of Rishabh Pant, Iyer and Shubman Gill (who wasn’t selected). “The level of confidence that they have is amazing to see. As I have mentioned so many times before, at 19-20, we were not even half the players these guys are. Skills have developed because of exposure to tournaments like the IPL. It’s the best thing that can happen to a cricketer. They are so confident by the time they come here that they learn very quickly from their mistakes because they have already played in front of so many people. But the intent has to be that ‘I am using this platform to play for my country’. And I think that these guys are in that zone.”

Kohli, however, didn’t want the youngsters to repeat the mistakes that he made in his initial years.

“I made many mistakes when I was growing up. I got distracted and wasn’t focused initially. Then I pulled my way back. I am grateful for where I am. The only thing that should stay with you is hard work.”

One of the ways through which Kohli has become one of the best batsmen in the world is through his fitness routine which has rubbed on to his team-mates in the Indian dressing room. Kohli said the results showed even more for the bowlers in Test cricket.

“I realised after playing Australia in 2012 that the template is changing very fast in world cricket. These guys [Australians] are getting fitter,” he explained. “They are able to bowl consistently, bat for longer periods. Maarne ko ball hi nahin mil raha tha (they were not bowling loose balls). I wondered how was it possible that over a period of four Test matches, you don’t get loose deliveries to hit. Then I figured out that it’s a question of fitness level. I wanted to improve my fitness first because I didn’t want to be left behind.

“That’s how they [other players] came around the whole thing. You can see the difference in Test cricket. Our guys are not giving loose balls anymore. Batsmen fear our bowlers because they are able to bowl for longer periods regularly. They have clarity in their mind because their body is supporting their mind.”

India’s tour of the West Indies comes soon after their semi-final exit at the World Cup, in which they were firm favourites along with eventual champions England. India went down against New Zealand after topping the league stage and winning seven of their eight completed matches.

“What we have spoken to the team is that you should be proud of the way you have played and must never forget that,” Kohli said about their World Cup performance. “The moment you start taking credit away from what you’ve done, you start putting unnecessary pressure on yourself. The important thing is to be humble about what you do but at the same time, don’t beat yourself up to the extent that you lose your admiration. That balance is very important.”

“Most importantly, it builds your character because suddenly this thing happens. When your belief is right up there and everyone’s playing so well, and suddenly, you know, you’ve been outplayed. It’s very difficult to digest because you know you didn’t make many mistakes to be knocked out. When you make mistakes, you can point them out and take ownership of that but when you have been outplayed then the acceptance becomes difficult. You wake up and think you didn’t do much wrong but we are still out.”