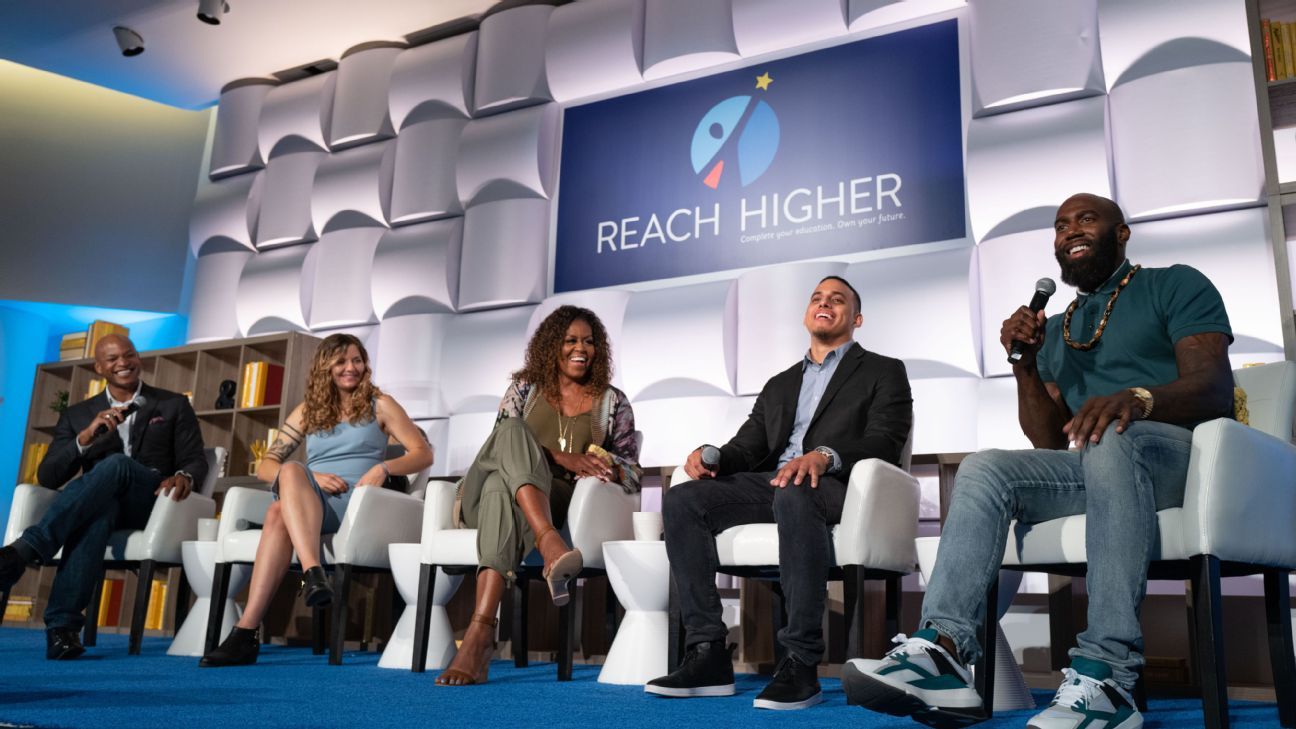 The topic was mental health. Michelle Obama, addressing a crowd of more than 50 first-generation college-bound students at her annual Beating the Odds Summit on Tuesday at Howard University, looked over at Philadelphia Eagles safety Malcolm Jenkins as she finished her point and signaled for him to take the floor.

“I know for me, mental health wasn’t anything we talked about when I was in school. But … I am in therapy once a week at this point in my life because I recognize that I’m somebody who’s responsible for a lot of things, and I put a lot of pressure on myself, and so with that comes stress and a little anxiety,” he said.

“A lot of you, if you’re a first-generation college student, you’re the first one to do it. You feel like your family is counting on you, depending on you. You have these outside pressures that are on top of being a college student. You have to find ways to recognize that and deal with that in a healthy manner.”

This is how Jenkins spent his final day before the start of the Eagles’ training camp: a chair over from the former First Lady, speaking to a group of students who had overcome everything from homelessness to special needs to be in a position to receive a post-secondary education. Tuesday’s workshop was designed to equip the students with strategies to ensure that they see things through, and Jenkins was called on to help in that messaging.

“For me, that was an easy yes,” Jenkins said.

The Players Coalition, co-founded by Jenkins, has supported Obama’s Reach Higher Initiative before. In May, coalition members including Anquan Boldin, Demario Davis and Josh Norman traveled to California for its college signing event.

A first-generation student herself, Obama started the Reach Higher Initiative during her time in the White House. According to stats provided by Obama’s camp, students from the bottom income quartile have a 9% six-year college graduation rate, compared to a 73% graduation rate for students from the top income quartile. In some communities, as many as 40% of students who are accepted to college never make it there, for reasons that include financial burden and fear of leaving home.

“Every single one of you here had to get over some deep, dark obstacle, whether it was in your own mind or something that was real that was going on in your lives, and that has given you the strength to do what you have to do next,” Obama said. “So I just want you to know: You can do this. You belong here. This was not a mistake.”

The Players Coalition has three main areas of focus: Criminal justice reform, community and police relations, and education and economic advancement. Much of the effort since the coalition’s inception in 2017 has gone toward criminal justice reform. The Coalition is beginning to ramp up the other two pillars of the operation.

“We’ve already shifted some of that [focus] already. … We’ve started to roll out a little bit more in that area and will also be rolling out some campaigns around policing this fall,” Jenkins said. “We’re still growing in the development of all of these focus areas.”

The focus on the educational side was on display Tuesday, as Jenkins offered some advice to the students Obama’s event had gathered.

“Allow yourself to grow. Allow yourself to grow into whoever it is you’re going to become. College is not the end goal. It is just a process,” he said. “So there is going to be plenty of times when you fail. You might meet some confusion. You may change majors. Whatever it is, you might take some time to figure out what you really want to do. Your beliefs may change as your experiences change. But treat college as just that: an opportunity to learn and grow as an individual and really find your own purpose.”