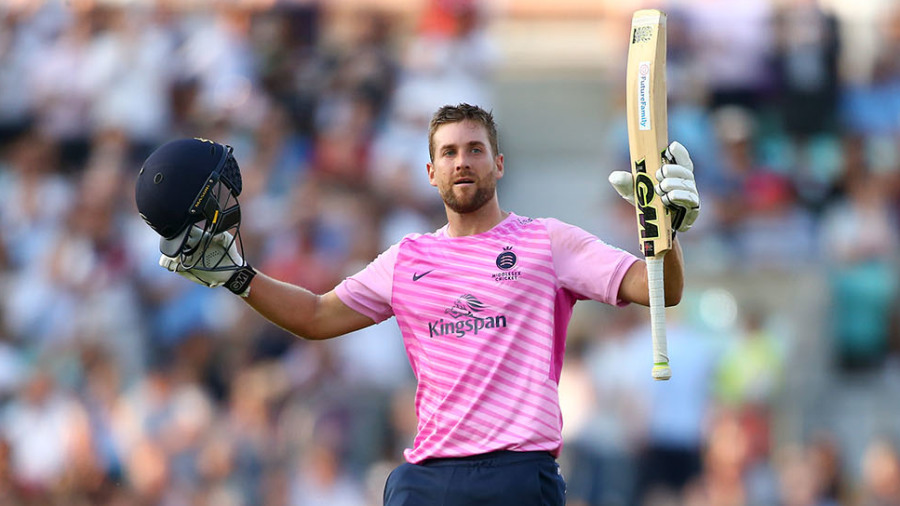 The World Cup is over but the summer party has just begun, judging by the enthusiastic capacity crowd at The Oval, who watched Dawid Malan as the life and soul of Middlesex’s 37-run win over Surrey in their Vitality Blast match.

It was one of those evenings to remind you that when England actually does summer it feels like there’s no better place on earth – unless, of course, you’ve been stuck underground on the Northern Line with no air-conditioning waiting for a platform to clear at Kennington tube station.

Above ground, the beer flowed, the stands were brimming and the batting action from Middlesex – Malan in particular – was hot.

Unlike England’s World Cup triumph on home soil, proceedings didn’t exactly follow the script when man of the moment AB de Villiers was out for just 3 to what soon proved to be a poor lbw decision when replays showed his attempted reverse sweep off Imran Tahir made clear contact, according to Ultra Edge.

However, to focus too heavily on de Villiers – who had a wonderful night out in Middlesex’s opening match last week, when he plundered an unbeaten 88 off 43 balls in a seven-wicket win over Essex – would detract from a brilliant performance by Malan.

An unused member of England’s touring party for their T20I series in the Caribbean earlier this year, Middlesex captain Malan smashed 117 off 57 balls with 11 fours and seven sixes to play a big part in setting Surrey 210 for victory.

After Middlesex won the toss and elected to bat, Stevie Eskinazi and Malan set off at a blistering pace. Malan initially took a back seat to Eskinazi but immediately after the Powerplay, by which time the pair had put on 55 runs, Malan surged ahead, slamming a six and a four off the last two balls of Gareth Batty’s first over.

Malan moved in sight of his half-century first too. His thumping six off Tahir sailed well back into the first tier of the Bedser Stand to bring him within touching distance of the milestone, which he brought up three balls later with a four. He didn’t stop there, meting out similar treatment to Liam Plunkett in the next over and hitting Batty for consecutive sixes in the next.

The TV camera kept panning to de Villiers in anticipation and he finally made his entrance to the pumping beat of Darude’s Sandstorm – and a huge roar from the crowd – when Tom Curran bowled Eskinazi round the legs for 42 off 31 balls to put Middlesex at 131 for 1.

They cheered as de Villiers fended off a Curran bouncer backward of point for a single, but his innings bit the dust in disappointing fashion a short time later and for the first time all evening the stands fell into a lull, even before replays showed how unlucky he had been in his dismissal.

It did not take long for the spectators to liven up again, though, as they enjoyed Malan’s knock. He reached his century off 49 balls with a single off Jade Dernbach, who later went for 23 in the penultimate over with Malan and George Scott indulging in a six and a four each.

Malan finally fell with three balls remaining in the innings, edging Curran to Ollie Pope, who took an excellent overhead catch behind the stumps.

With the temperature still hovering around 30 degrees at 8pm, the home crowd remained upbeat despite the considerable task facing their side.

Pope gave good chase after the early loss of openers Will Jacks and Aaron Finch, reaching 47 off 31 deliveries. But once he skied Toby Roland-Jones to Nathan Sowter to seal his exit, it felt like there was too much left to do for Surrey. Jordan Clark offered a neat cameo of 21 off 11 balls but, with Curran and Dernbach at the crease and three wickets in hand, the hosts needed 53 off the last three overs.

Steven Finn took a strong catch, running round and diving at long-on to remove Curran off Roland-Jones and that all but signalled closing time. When Roland-Jones had Dernbach caught by Sowter four balls later to finish with 4 for 35 off his four overs, some revellers took the hint and made their exit, although the majority stayed to applaud the visitors’ victory.

Malan admitted his knock ignited memories of his match-saving innings against Lancashire at the same ground to win their 2008 Twenty20 Cup quarter-final. Coming in with his side 21 for 4, Malan scored 103 off 54 balls to help Middlesex to a 12-run victory en route to eventually winning the title.

“A little bit. Stuey Law, the coach, was actually playing against us, he was the captain for Lancs that day, so I might have a chat with him afterwards and see what he would have done differently,” Malan said with a smile. “But it’s fantastic. To score Twenty20 hundreds is tough so I’ve enjoyed that so much. It is early but the signs are good.”